If you are looking for a quick read then these are the books that we recommend. Any Sci Fi fan will love these short stories – so what are you waiting for? Take a look below and get reading!

Fermi and Frost by Frederik Pohl

This product was recommended by Neil Roach from Boxroom Office

This was my first introduction to Pohl and showed me how you can tell an incredible tale in just 20 pages. That the very best writers can draw you into their world without forcing you to trawl through their epic work. The story is a heart-warming tale of a man who becomes an unwitting hero while also encouraging the reader to consider the Fermi Paradox and where we find ourselves today.

This product was recommended by Pamela K. Kinney from PamelaKKinney

Lieutenant Michelle Roddenberry is a maverick and flaunts the rules. But as an officer in the Terra Federation Navy and with a galactic war going on against an alien race, one must follow orders. It is the difference between life and death. Grounded from joining her squadron on another mission and about to be dishonorably discharged too, she flaunts the rules again and steals her fighter spacecraft, flying off to join her squadron for one last battle. Instead of finding her squadron, Michelle crashes on an unknown planet. It is a world full of changing wonder and danger. She finds another castaway there, an alien called Dakna. Both find themselves in a war with the planet, as Michelle tries to find a way off planet for them. The rule book thrown out; Michelle may find her maverick ways the only way to survive.

Binti is a science fiction novella that explores the topic of black oppression in the far flung future. It is also an excellent examination into how one can adapt to new worlds while not sacrificing who they are or where they come from. I recommend this book as its message is timely and can encourage all of us to see why we should embrace the differences of others instead of clinging to our assumptions.

Every Heart a Doorway by Seanan McGuire

Every Heart a Doorway is a story that explores the question: what would have happened to the kids who visited Narnia when they came back to the real world? The book follows a girl who has come back from her own Narnia and has now found herself delivered to a school for wayward children. The book takes you away to the worlds of the main character and the other students. It is a great escape for those currently still in lock down due to the pandemic.

The Mortal Immortal by Mary Shelley

Mary Shelley is most known for her book Frankenstein, but The Mortal Immortal is an often overlooked gem. The story chronicles a person who is living forever and what it has done to their mindset. Is this person a vampire? Were they just born this way? The book makes you question if our time on this Earth is finite for a reason, and if living forever would be a curse or a prize.

This product was recommended by Brian Coughlin from Hear It LLC

Auto Clarity is a dystopian look at our world as social media, texting and other digital forms of communication evolve. From autocorrect to autocomplete, people are increasingly letting technology clean up the way we speak. This is often isolating, and Auto Clarity looks to the next stage of this technology: AI understanding what we mean, our true intent, better than we do. Rather than a traditional dystopian POV, Auto Clarity is told from the perspective of a high-level digital product designer helping build the technology. He encounters increasingly challenging moral and ethical questions as the world changes around him.

The Space Merchants by Frederik Pohl

In this book that eerily reminds of today’s world, advertising dominates the human experience. Written in 1953, the book explores an overpopulated world of the future where governments are mere puppets to businesses (sound familiar?). Water and fuel are scarce, yet the luxuries are being aggressively advertised. The main character of the book is a super-star copywriter named Mitch Courteney. As Venus becomes the new destination for the human colony, his job is to create an ad that will attract colonists to a still harsh environment (which will take generations to “terraform”). This captivating tale is freakishly close to reality, which makes it ever so relatable to today’s readers.

This product was recommended by Varak Kaloustian from TLOV Publishing

Not only is it under 200 pages, but it is a high-octane, action-packed sci-fi fantasy adventure with a central theme of teenage self-discovery. In a time as uncertain as social distancing, people are sometimes forced to ask themselves who they are, and The Solar System’s Prophecies can help these people find an answer.

The Time Machine by H.G. Wells

This product was recommended by Stefanie Lesser from Hope & Love Radio

A true classic in the heart of sci-fi. THis book is about a scientist who builds a time machine and decides to test it.. At first he travels 3 hours ahead, and then decides to travel to the year 802, 701. During his adventures he meets a species of the human race called the elois, soon to realize more humans exist even years ahead. Highly recommend.

The Left Hand of Darkness by Ursula Kroeber Le Guin

It’s a science fiction novel that follows the story of Genly Ai, a human native of Terra sent to the planet of Gethen. Ai’s mission is to persuade the nation of Gethen to join Ekumen, another planet but finds it difficult as he is unable to understand the culture of Gethen. The theme of the novel is the effect of sex and gender on culture and society, which Ai then explores with Estraven, a politician of Gethen. The novel revolves around the unfolding loyalties of its two main characters and the contrast between the religions of Gethen and Ekumen. I would recommend the book for the reader who loves to read fiction as Le Guin has narrated the entire history of people living on other planets except for Earth using the fictional work. 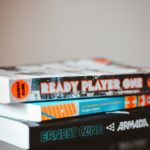 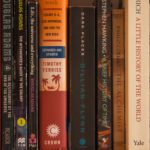